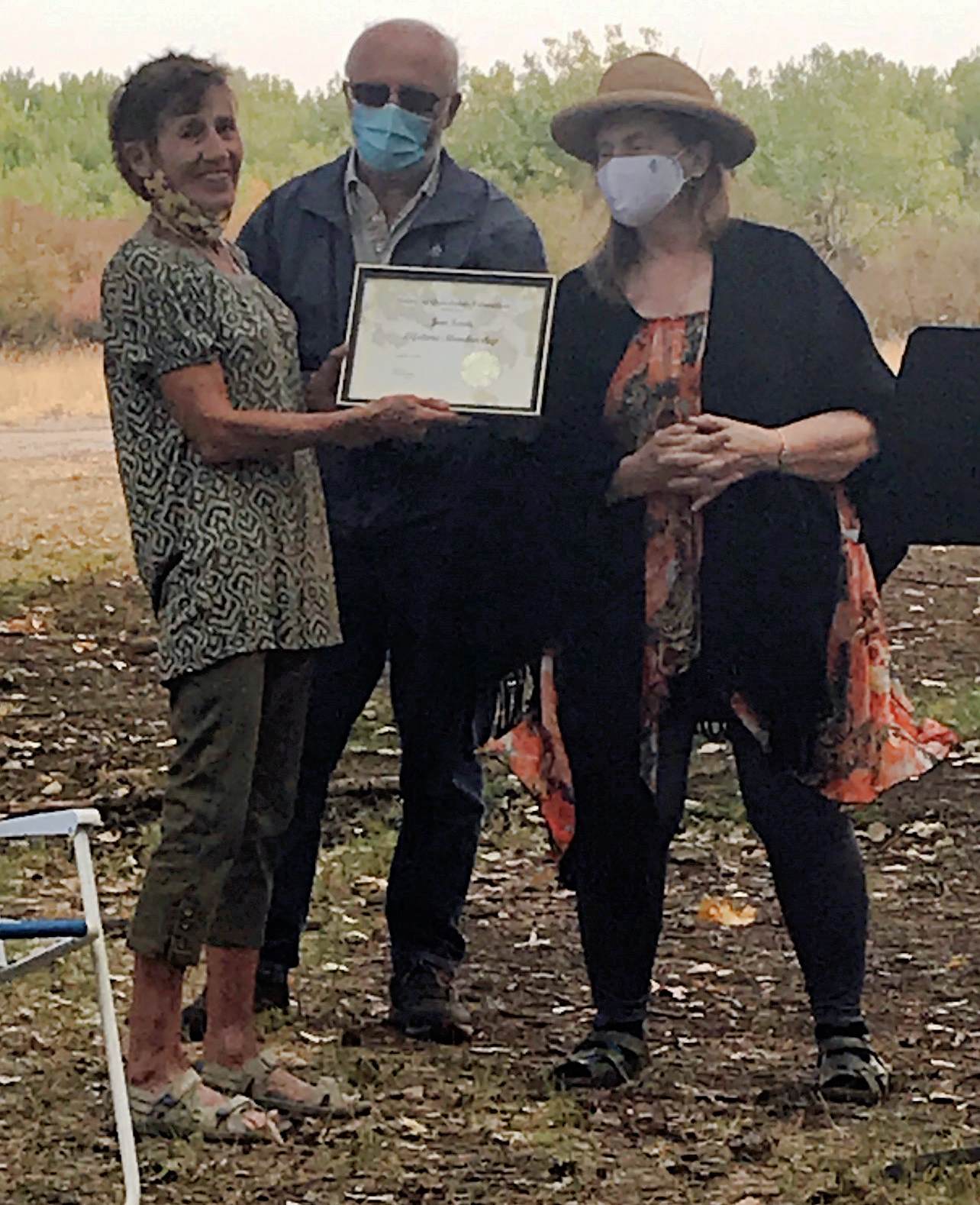 Today, we are pleased to honour one our most cherished naturalists with the GN Life-time Membership award.  With the exception of times spent in Calgary, Fort Saint John and Okotoks, Jan spent most of her life in this area, either in Medicine Hat or Ralston.  We all know of Jan’s passion for insects.  This fascination started very early in life, before she could even walk, when she would pick up bugs while crawling on the floor.  Whenever Jan had her fists clenched, her mother would ask her to open her hands to check her latest discovery.  Jan’s interest in the natural world continued in her teens when she collected fossils and rehabilitated wild birds.

Jan spent most of her working life caring for people in nursing homes and in hospitals, where she did personal and occupational therapy work.  In 1990, Jan was diagnosed with a muscle-related disease that prevented her from continuing these activities.  Not discouraged, Jan saw this disability as an opportunity to pursue more fully her naturalist interests, which became a full-time passion by the year 2000.  She first started with butterflies and gradually included moths in her research activities.  The study of moths was particularly challenging due to the large variety of them.  When Jan started this work, there was very little known about them.  Books and other resources that could help her identify species were almost nonexistent.  One book that she did find dated back to the 1920s.

Jan’s moth and butterfly collection methods were very cautious in that she only kept one specimen per species except in the case of ‘First Observed’ species, where a few more samples were kept for confirmation and historical archiving.  She also bred moths and butterflies to document the five caterpillar molting phases.  As her research progressed, Jan diversified her interests from lepidoptera, moths and butterflies, to entomology, insects in general.

Jan’s collection activities have included many regional firsts for a variety of insects.

She also found two species of moths that were believed to be extinct and had not been seen in Alberta for 40 and 60 years.

Throughout her research, Jan was influenced and in frequent contact with a variety of well-known academics and government officials including:

Jan has been active in a variety of organizations including:

In 2009, Jan won the prestigious Frederick S. Carr award from the Entomological Society of Alberta.  As indicated on that society’s website, Jan, known as the ‘caterpillar lady’ for her work in raising caterpillars, is recognized as an expert who is willing to share expertise with others and ‘has contributed many new and unusual records of Alberta insects to other researchers’.  Because Jan’s current health does not permit her to travel or attend indoor meetings, the Alberta Lepidopterist Guild held its 2019 yearly campout in Medicine Hat so that members of that society could meet her.  She has had special visits from other entomologists including Jason Dombrowski, curator at Cornell University, and Matthias Buck, assistant curator at the Royal Alberta Museum.

In terms of publications, some of Jan’s research has been included in the 2010 ‘Zoo Keys’ book titled ‘Annotated List of the Lepidoptera of Alberta, Canada’.  Jan also hopes to publish her work on the Insects of Medicine Hat and the molting stages of caterpillars.  In addition to a moth collection donated to the GN Interpretive Program, Jan has arranged to make major donations of her moth specimens to the Strickland museum and bees and wasp specimens to the Royal Alberta Museum.

More locally, Jan has made many GN contributions through her interactions with the Club and the Interpretive Program.  In addition to her donation of moth specimens, she published a series of articles on moths in the Chronicle, gave many presentations on moths, butterflies and caterpillars, lead butterfly walks and wrote reports to assist the Interpretive Program staff.  Within the city, she provided assistance to the Medicine Hat & District Horticultural Society and to the Windmill Butterfly House.  She also gave presentations at the Esplanade as part of an exhibition on butterflies and at the first Medicine Hat Pecha Kucha Night event.  GN members and staff who helped Jan collect samples could not help but being fascinated and motivated by her knowledge and passion.

Jan’s research often came with interesting and humourous situations.  For example, her efforts to attract and collect moths sometimes caught the attention of the local police force such as when she and ‘co-conspirators’ poured liquor on trees to attract moths in the middle of the night at Police Point or when she extended her net with a long pole to capture moths at night near the lights at the top of the Safeway building.

As indicated on the Carr award section of the Entomological Society of Alberta website, ‘Jan Scott, of Medicine Hat, is an amateur in the purest sense; she does not have formal training in entomology, and is not employed in entomology, but pursues it purely out of personal interest … Now that she has become an expert in her own right, Jan freely shares that expertise with others in southeastern Alberta’.  The fact that, as an amateur, Jan was able to gain the respect and recognition of professional entomologists, including academics and curators, is a tribute to her pure passion, unrelenting quest for knowledge and her generous sharing of information and expertise with both entomologists and the general public.  For all these reasons, GN is pleased and honoured to present Jan with its Life-time Membership award.